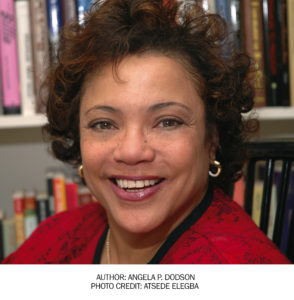 Angela P. Dodson is author of “Remember the Ladies: Celebrating Those Who Fought for Freedom at the Ballot Box” about the woman suffrage movement in the United States and women’s political gains up to the present.

Dodson is an independent editor, writer and consultant. She founded an editorial services company, Editorsoncall LLC, www.editorsoncall.com   in 2012, to link freelancers to clients in need of writing, editing, graphic and photographic services.

Angela is a former senior editor and former Style editor for the New York Times. She has most recently been an online editor and book reviewer for DIVERSE: Issues In Higher Education, diverseeducation.com and diversebooks.net. She is the former executive editor of Black Issues Book Review. She has worked on several start-up publications and websites.

In recent years, Dodson has edited and ghost-written books for major publishers and numerous self-published authors of fiction and nonfiction. As an editor, Angela has worked on such books as “In Charge: Finding the Leader in You,” by Myles Munroe and “He Is Risen: Reflections on Easter and the Forty Days of Lent,” by Richard Abanes. Her book development projects have included “Brainwashed: Challenging the Myth of Black Inferiority” by Tom Burrell, and most recently, a history of reporters covering the Civil Rights Movement and the memoir of a pioneering female journalist.

She has also done writing and editing for various newspapers and magazines, including Essence and Heart & Soul. She has been a consultant for the Maynard Institute for Journalism Education and the Hampton University School of Communications. She has taught workshops on writing and editing for many organizations including the National Black Writers Conference, the National Association of Black Journalists, the American Press Institute, the American Society of Newspaper Editors and various colleges. She has also been an adjunct instructor in media studies at Mercer County Community College.

A native of Beckley, West Virginia, she was reared mostly in western and south-central Pennsylvania and returned as a teenager to West Virginia, where her father, William A. Dodson Sr., worked for the Federal Aviation Administration in Charleston and her mother, Kira Evelyn Dodson, worked as a seamstress.

Angela is married to Michael I. Days, editor for reader engagement and vice president of the Philadelphia Media Network and author of “Obama’s Legacy: What He Accomplished as President. He was most recently editor of The Philadelphia Daily News, and has served as managing editor of the Philadelphia Inquirer. The couple raised four sons, brothers they adopted in 1991.

Angela is a member of Alpha Kappa Alpha Sorority Inc., the National Congress of Black Women, the National Association of Black Journalists and the Central New Jersey Chapter of the Gospel Music Workshop of America.

She was also the host of an award-winning, radio program, “Black Catholics, Yes!” about black Roman Catholics for the Diocese of Trenton, NJ., formerly heard on 1300 WIMG and other stations, as well as on the Internet. She is a member of the Church of the Blessed Sacrament/Our Lady of the Divine, where she is in the gospel choir and is a lector and parish council member. Angela is also a founding member and trustee of Commandry #598, Ladies Auxiliary of the Knights of St. John International. She was a recipient of Bishop John Smith’s Nostrum Ecclesiam Tempus (Our Time to Be Church) Award in July 2007 and the National Black Catholic Congress Servant of Christ Award in 2012.